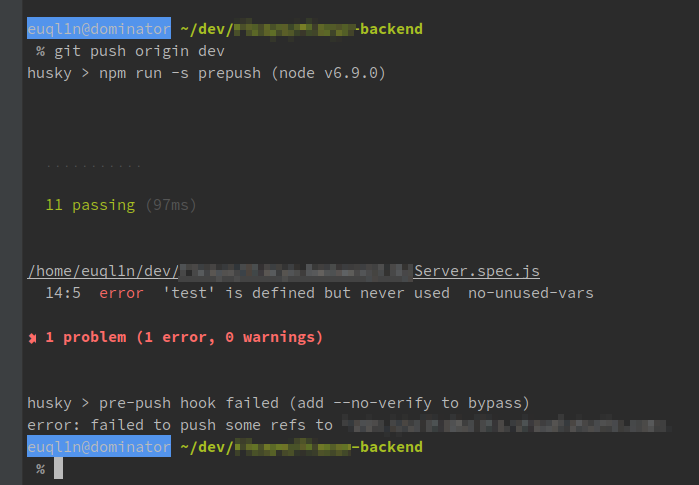 In Summer 2017 I was working on an internship with Microsoft and UCL. I was put in charge of designing and developing the backend architecture for a reasonably big system. Continuous integration (CI) and deployment (CD) were a must, so I tried to automate as many things as possible. As you might already know, I'm a huge Node.js fan so naturally I decided to work with this platform. When my projects involve writing JavaScript, I always insist on using linting tools (e.g. ESLint) to ensure consistent coding style throughout the source code.

Truth be told, although I always run unit tests before pushing I often forget about linting (npm run lint in most of my projects). Due to this, I sometimes push "bad" code (unused variables, inconsistent commas, etc.) to CI, which results in the whole team being notified about a build error. This article talks about avoiding this issue by using Git hooks.

To solve my particular issue, I decided to use a pre-push hook. I could also use a pre-commit, but I don't have any issues with inserting an extra commit fixing any linting problems. The commands I wanted to run for my particular project are npm run test-compact and npm run lint. These are executed pre-push, making sure the code I push to online repositories is working. The other command I run pre-commit is npm run apidoc followed by git add ./doc/, which scans the source code for doc blocks, generates the documentation and adds it to my commit (thanks, apiDoc).

To summarise, my Git hooks now do the following: